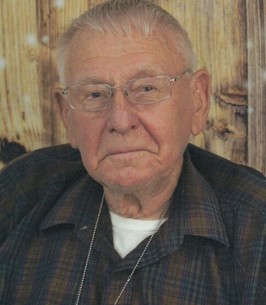 Funeral services for Virgil Loewe, Sr. age 91 of Wisner, NE will be held on Wednesday, June 8, 2022 at 1:30 p.m. at St. Paul's Lutheran Church in Wisner, NE with Pastor Jared Hartman officiating. Interment will be in the Wisner Cemetery with Military Honors. Visitation will be on Tuesday from 5:00 p.m. to 7:00 p.m. at the Minnick Funeral Home in Wisner, NE and will continue on Wednesday from noon until the time of the service at the church.

Virgil passed away on Friday, June 3, 2022 at the Pender Community Hospital in Pender, NE.

Virgil Edwin Loewe was born July 13, 1930 on the farm three miles south of Pilger to Edwin W. and Edna (Pagels) Loewe. He was baptized at St. John’s Lutheran Church in Pilger and confirmed at St. Paul’s Lutheran Church in Wisner, NE. He was a life member of St. Paul’s, helping build the church and was involved in church council and organizations. He taught Sunday School for twenty years. Virgil attended country school near Pilger and Wisner, graduating 8th grade from Cuming County District #39.

Virgil spent his young life helping on the family farm north of Wisner of which he still possess an acreage.

Virgil enlisted on January 1, 1951 in the U.S. Air Force at the start of the Korean War, where he took basic training and job training at various Texas Air Force bases. He obtained his Air Plane, Air Craft and engines training and was assigned to Ellsworth Air Force Base in Rapid City, SD. He worked on B36 Bombers as a post flight engine inspector in Rapid City for 2 and one half years. He was transferred to Biggs Air Force Base in El Paso, TX and was honorably discharged on November 20, 1954 as Airman First Class.

While stationed at Ellsworth Air Force Base, he met his wife Lila Mae Petersen from Cordova, NE, his good buddy’s sister. They were married October 24, 1953 at the Immanuel Lutheran Church in York, NE. Three children were born to this union-Debra, Virgil, Jr., and Gena.

After his discharge from the military, they returned to the family farm and took over the farming from his parents, and raised cattle and hogs. Over the years, Virgil was also a rural mail carrier, crop adjuster for Federal Crop Insurance, was a field man for the Cuming County ASCS office, and was an insurance agent for AAL and Lutheran Brotherhood Insurance. He and Lila helped charter the Wisner Farmers Market, and they were involved in the growing of garlic throughout Nebraska, hence he was named “Garlic King of Nebraska”.

Virgil was preceded in death by his parents-Edwin and Edna Loewe, wife-Lila Mae Loewe on March 1, 2001, grandson-Justin Wiese, and sister-Alberta Loewe.