To share your memory on the wall of Darla Stewart, sign in using one of the following options:

Darla passed away on Friday, May 14, 2021 at Legacy Garden Rehabilitation and Living Center in Pender, NE.

Darla Mae (Schroeder) Kai Stewart, was born on October 18, 1940 to William “Henry” and Buena Mae (Winbolt) Schroeder in Emerson, NE. She had one brother younger than her, Darwyn Lee.

She and Darwyn lived on the family farm with their parents, farming until 1956, when the family moved to town. They both attended Country School and Emerson Public School, where Darla graduated from in 1958. She was Drum Majorette for the band.

In 1958, she married a sailor, Mylen Joseph Kai, to this union a daughter was born, Teresa Mae, in 1960. Darla worked at various jobs during her employment years, Walbaum’s, Pender Community Hospital, Curtiss Law Office, The Royal D Bar, Stage III Café, and she later helped her second husband lay water lines, with Stewart Trenching, and rode the Trimble Bean Buggy.

She and Mylen divorced in 1967, and in 1968 was married to Glen E Stewart in Yankton, SD with friends, Butch and Mikki Kubik standing up for them.

While married to Glen, she learned to drive a straight truck, and how to load cattle, so she could go with Glen on long hauls and see the Country.

Darla sobered up on March 8, 1971. She celebrated 50 years of sobriety this year.

After retiring, she took up reading, learned to crochet, she and Glen enjoyed camping, fishing, and gardening. Glen grew the garden and she canned what was grown. She loved music. She and Glen later divorced.

She became a member of St. John the Baptist Catholic Church, was a member of the Fern Rebekah Lodge, the Emerson Betterment Group, and the Saturday morning Coffee Group at the Emerson Library.

Her last years were spent in several assisted living and nursing home facilities, the last one being Legacy Garden in Pender, NE. She loved spending time with her family.

Darla was preceded in death by her parents-Henry and Buena, her brother-Darwyn, ex-husbands-Mylen and Glen, in-laws, aunts, uncles, and cousins.
Read Less

To send flowers to the family or plant a tree in memory of Darla Mae Stewart, please visit our Heartfelt Sympathies Store.

We encourage you to share your most beloved memories of Darla here, so that the family and other loved ones can always see it. You can upload cherished photographs, or share your favorite stories, and can even comment on those shared by others. 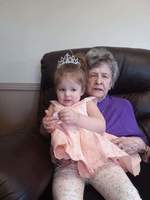