To share your memory on the wall of Betty Smith, sign in using one of the following options:

Betty Lynne Smith was born on January 14, 1924 at West Point, NE to Clem and Rose (Poeschl) Goldsberry. She was baptized and confirmed at St. Mary’s Catholic Church in West Point, NE and attended Guardian Angels School through the 10th Grade.

In June of 1940, she was united in marriage to Dayton Smith. Betty worked as a Nurses’ Aid at St. Francis Memorial Hospital until her retirement.

Betty was a member of St. Mary’s Catholic Church and its St. Mary’s Guild. She loved playing cards, especially Pinochle with the neighbor ladies, going to the Dairy Queen with friends, spending time at the Sunshine Center until residing at St. Joseph’s Retirement Community in 2015, she later resided at Colonial Haven Nursing Home in Beemer in March of 2018, where she loved to play Bingo, work puzzles and do color art projects. Betty has resided at St. Joseph’s Hillside Villa since March of 2019.

She is survived by:
Son-Reggie Smith of Dunning, NE
Grandsons-Ryan and Julie Smith
Michael and Tiffany Smith
3 Great Grandchildren-McKade, Andrew and Giana Smith

She was preceded in death by her parents, daughter-Linda Smith, brother-Paul Sorensen, and her step-father-Walter Sorensen.
Read Less

To send flowers to the family or plant a tree in memory of Betty Smith, please visit our Heartfelt Sympathies Store.

We encourage you to share your most beloved memories of Betty here, so that the family and other loved ones can always see it. You can upload cherished photographs, or share your favorite stories, and can even comment on those shared by others.

Posted Sep 27, 2020 at 02:07pm
Worked with Betty many years ago at St Francis Hospital, never a dull minute. By the time I started there, Betty was a Ward Clerk, she stayed at the Nurses Station answering the phone, helping doctors with their charts & keeping the rest of us entertained! She never missed a beat, her dry sense of humor was priceless, she could get a chuckle out of the most serious Docs. Only fond memories of this Betty Boop!
Comment Share
Share via: 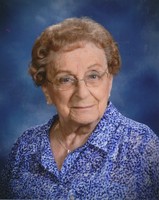